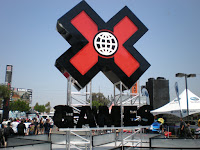 The fourteenth ESPN X Games, a made for TV action sports spectacle, attracted sell out crowds at the Staples Center and Home Depot Center in Los Angeles. Multiple days of BMX, skateboarding, motocross, and rally car engaged action sports fans in the stands and on the TV. Rather than supporting a core set of events, ESPN and sister network ABC constantly attempt to push the boundaries of extreme sports, injecting new formats and events into the lineup in an effort to capture the attention of fickle viewers. This year, ESPN’s plan to drop the skateboarding vert event, which has been a mainstay of the X Games since the maiden event in 1995, almost derailed the entire production. 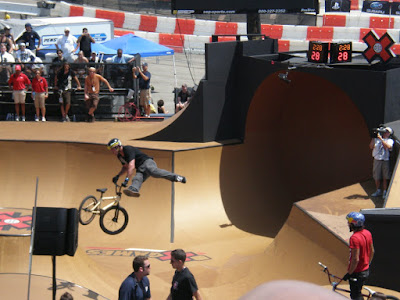 Rob Darden with big air on his way to SuperPark Bronze.

The X Games sought to eliminate the vert event in favor of a skateboarding “SuperPark” venue that was designed to replicate the pools and concrete skate parks that predominate the sport. The backlash by virtually all of the top competitors, however, promptly induced a reversal by ESPN and the reintroduction of the vert event. In an obvious attempt to undermine the event, ESPN configured a simple “old school” 13-foot vert ramp that was much shorter than last year’s and lacked any special elements. ESPN, obviously favoring the most awe inspiring events like megaramp, seemed intent on limiting the riders’ ability to showcase their talents in order to justify their decision to retire the vert venue. Despite their efforts, all of the top riders participated in the vert event with Shaun White failing to defend his 2007 title as last year’s runner up Pierre Luc Gagnon (PLG) took the gold. 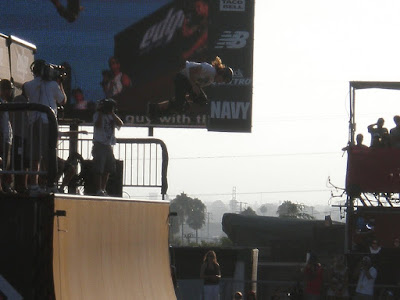 With the X Games 13 ratings increasing 7% to a total of 38 million viewers, it is both puzzling and obvious why ESPN would attempt to focus on shock value events as opposed to traditional favorites. On the one hand, the new “big air” events attract casual viewers who are entranced by the surreal feats while loyal fans crave the purity and innovation in traditional events. ESPN hopes to attract a broader audience by including novelty events, but they should be careful not to alienate the loyal fan base that supports the action sports industry. Competing tours such as the AST Dew Tour, founded by NBC and sponsored by MTV and Nike, combined with special events such as the Maloof Money Cup, premiering at this year’s Orange County (California) Fair with the largest purse in the history of the skateboarding, are providing leading skaters and BMX riders with attractive alternatives should ESPN and the X Games stray from the core events. Ultimately, ESPN’s attempt at redesigning vert, the aforementioned SuperPark event, failed to attract the top riders who viewed the venue as more suited to BMX. Failure to heed the message of the skaters and the massive crowd of fans that vert is an essential event could signal the demise of the pioneer action sports events, the X Games. 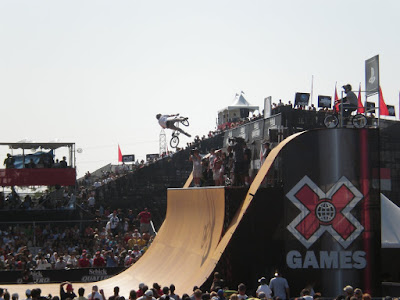 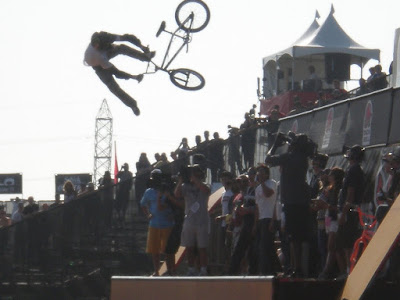