A False Sense of Security

The credit market meltdown, a consequence of lax lending standards and easy monetary policy, has led to turbulent markets over the past 18 months while prompting government bailouts and stimulus packages. In each instance, the market reacted positively under the assumption that the government or the Federal Reserve would rescue the ill-fated perpetrators and reckless consumers that precipitated the current crisis. As further losses were inevitably exposed, the market quickly realized that their previous interpretation was overly optimistic and the lows were retested. The federal guarantee of the GSEs has, at least temporarily, stabilized the credit markets and prevented the carnage that would ensue if the largest mortgage liquidity providers became insolvent. Recent strength in the dollar and falling commodity prices could lead one to assume that this rebound has legs. Time, however, will likely refute this conclusion.

A rapidly slowing European economy, driven in part by the efforts of the European Central Bank to curb inflation, has incited recent dollar strength and expectations for lower interest rates in Britain, Australia, and Europe. Concurrently, the slowdown in global economic activity has alleviated much of the supply and demand imbalance in the oil and commodities markets, leading to dramatic price declines that are reducing inflationary pressures. Consumer sentiment, which has a strong inverse relationship with fuel prices, has rebounded slightly as pressures on discretionary income have subsided. The August University of Michigan consumer sentiment index increased slightly to 61.7 from a June low of 56.4. These factors lead bulls to predict an abatement of inflationary forces and a rebound in economic growth in the U.S. While the stock market rebound has conveyed signs of optimism, credit markets continue to price significant uncertainty through higher credit and mortgage spreads and lower treasuries yields 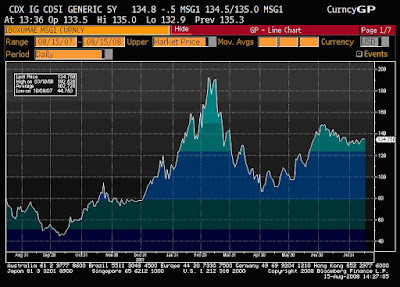 The growing disconnect between credit and equity market expectations suggests that there is significant disagreement about the ability of the bailout packages to address weakness in the housing and mortgage markets. Equity markets, perhaps driven by declining oil prices and strength in the dollar, have rebounded in anticipation of a trough in the current economic slowdown. Credit markets have discounted the effects of the bailout packages and predict a continued lack of liquidity as banks recapitalize. Retail mortgage rates have steadily increased, placing greater pressure on a struggling housing market. Until housing begins to rebound, no amount of bailout or stimulus packages can restore liquidity and stop the hemorrhaging of bank capital. In the mean time, expect further losses and additional bank failures to predominate along with corresponding volatility in the markets. The end, it seems, is yet to come.