Overview
The Del Mar Thoroughbred Club and Racetrack, nestled snugly in a valley between I-5 and the Pacific Ocean, is one of the premier horse racing facilities in the country. With average attendance and daily handle figures that place it among the top two tracks in the country annually, Del Mar attracts some of the best horses in the world to its annual summer meet. The racetrack, made famous by Bing Crosby’s song Where the Surf Meets the Turf, hosted the legendary Seabiscuit-Ligaroti match in August 1938 where more than 20,000 fans watched as Seabiscuit edged Ligaroti by a nose. Since then Del Mar’s popularity has exploded, taking a break only during World War II when the grounds were used to train Marines and support the war efforts. A massive $80 million renovation to the grandstands in the early 1990’s gave birth to the richest race in the country, the $1 million Pacific Classic Stakes, and has established the modern day Del Mar Racetrack as one of the most beautiful facilities in the country. 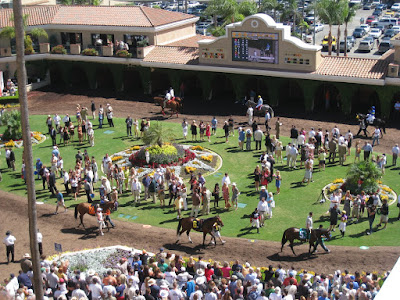 The Paddock at the Del Mar Thoroughbred Club
Facilities
The grandstands at the Del Mar Racetrack are divided into the Clubhouse ($10 admission) and the Stretch Run ($6 admission). The two sections are divided by the finish line and offer varying privileges. The Stretch Run directly precedes the finish line and has four levels of seating, two of which are predominantly reserved boxes. Admission to the racetrack does not include a reserved seat, but there will be limited free general admission seating on the fourth and fifth levels except for Opening Day and Pacific Classic Day. The remaining stadium style seats can be reserved for an additional fee. A substantial ground level viewing area in front of the grandstands enables visitors to bring their own seats or stand at the rail of the main track for up close viewing. 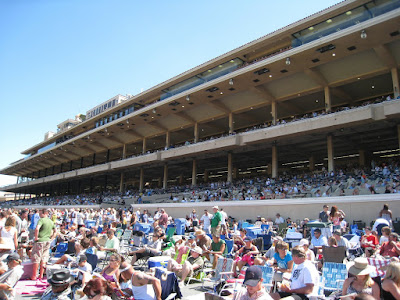 A Crowd of 42,549 Enjoys the 2009
Pacific Classic Day at Del Mar
The Clubhouse provides full oncoming views of the stretch run and finish line, but it has less available general admission seating because this section of the grandstands is dominated by reserved boxes and the members only Turf Club areas. Del Mar has three general admission restaurants, two in the Clubhouse section and one in the Stretch run, where a table for four can be reserved for the day (additional fee). These restaurants are in the lower level of the grandstands, but they have a good view of the first and fourth turns along with the straightaway. For those looking for a less expensive dining option, there are many concessionaires selling food and drinks throughout the grandstands.


2009 Pacific Classic Day
In addition to the $1 million Pacific Classic, the race card for the Pacific Classic Day features two other graded stakes races, the $300,000 Grade 1 Pat O’Brien Stakes run on the main track and the $350,000 Grade 2 Del Mar Derby on the turf. Zensational, a three year old that won Grade 1 races in his last two starts, was heavily favored in a small field for the Pat O’Brien Stakes, a seven furlong sprint that was the fourth race on the card. Winner of the Triple Bend Handicap at Hollywood Park in early July and the Bing Crosby Stakes at Del Mar in early August, trainer Bob Baffert and jockey Victor Espinoza sought a repeat for the impressive thoroughbred on Del Mar’s main track. Zensational failed to disappoint, using his impressive speed to lead the entire race by multiple lengths before runner-up Noble Court closed to within a length at the finish. The win marks Zensational’s fifth win in seven starts, suggesting future dominating performances are likely. 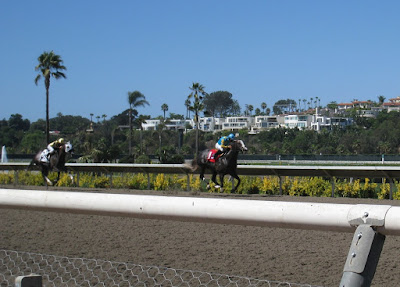 Zensational Dominates the Field
in the 2009 Pat O'Brien Stakes at Del Mar
The Del Mar Derby, the sixth race of the day, is a one and an eighth mile Grade 2 turf race for three year olds. A nine horse field presented no clear favorite, but Afleet Eagle and Battle of Hastings were the obvious contenders. As the horses rounded the final turn for home, surprising 22-1 long shot Rendezvous found a burst of speed and closed strong, nosing out leader Battle of Hastings in a photo finish. The win marked Rendezvous’ fourth win in 13 starts and would be one of three wins on the day for jockey Joel Rosario. 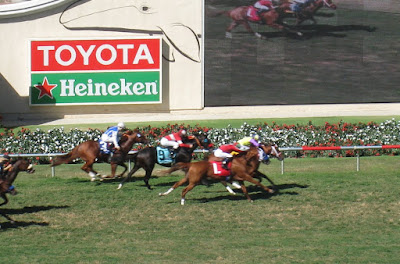 Rendezvous (#1 in Red) and Jockey Joel Rosario
Close Strong to Win by a Nose
Ninth on the card, the 19th annual Pacific Classic Stakes, a Grade 1 race for horses three years old an up, is the capstone race of the Del Mar season. Recent winners such as Lava Man and Pleasantly Perfect have earned millions of dollars in prize money placing them among the true champions of horse racing. The one and a quarter mile race is run on the main track at Del Mar, which was converted from dirt to the safer Polytrack in 2007 and features a straight chute start down the stretch run and two turns around the oval track. Santa Anita Handicap winner Einstein entered the race as one of the favorites (4-1), but was run down on the homestretch by jockey Mike Smith and the 24-1 underdog Richard’s Kid. Smith, the Hall of Fame jockey that has been featured on Animal Planet’s reality TV show Jockeys, rallied wide around the final turn and finished strong with favorite Rail Trip (5-2) trailing Einstein for third. 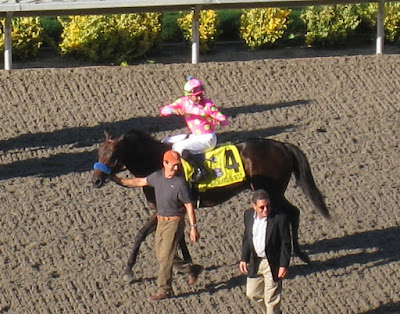