As the birthplace of viticulture and winemaking in Oregon, the Willamette Valley gained worldwide attention for its Pinot Noir when David Lett of Eyrie Vineyards placed third in a 1979 international wine competition in Paris before following up with a second place finish a year later. Far and away the dominant red wine varietal of the region, Pinot Noir plantings expanded from Lett’s original 20 acres in the Dundee Hills to over 12,000 acres of wine grapes across the Willamette Valley. The primary varietals are Pinot Noir, Pinot Gris, Chardonnay, and Riesling.

The winemaking industry of the Northern Willamette Valley is revolves around McMinnville, Oregon, with the major viticultural regions of Yamhill, the Eola-Amity Hills, and the Dundee Hills in close proximity. Consisting predominantly of smaller vineyards, the Oregon winemaking industry is highly fragmented but also cooperative in nature. The vastly different licensing and skills, not to mention the substantial capital investment required to be a winery, compels smaller growers to collaborate with established wineries to produce their wines. In exchange for 60-70% of the harvest, the winemaker will oversee the entire enological process and will use the remainder of the harvest to produce wines under the vineyard’s label. The winemakers are able to create wines for sale under their own label by artistically blending the output of various growers, often leading to impressive outcomes. 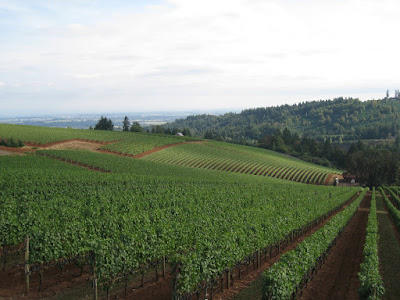 The Dundee Hills of the Northern Willamette Valley

Panther Creek Cellars
Located in McMinneville’s historic former power station, Panther Creek Cellars epitomizes the high quality Oregon winery that grows no grapes of its own. More than twenty years of experience producing predominantly Pinot Noir has led to a refined approach and some impressive wines. Most impressive was the 2006 20th Anniversary Pinot Noir, a pleasant wine with slight hints of earth on the nose and well balanced fruit on the palate. For a little more spice, the 2007 Winemaker’s Cuvee Pinot Noir is a smooth wine with the telltale earthy nose of the Oregon Pinot Noir but a little more spice on the palate. The 2007 Verde Vineyards Pinot Noir, however, was the lone disappointment of the Panther Creek Pinots with a nose and palate of cocktail sauce. Top to bottom, Panther Creek Cellars has one of the most impressive portfolios of Pinot Noir in the Northern Willamette Valley.

Bella Vida Vineyard
In contrast to Panther Creek, Bella Vida Vineyard is a small grower in the Dundee Hills that relies entirely on outside winemakers to craft their wines. They have selected a quality trio of winemakers, but unfortunately the private label production of Pinot Noir totals less than 500 cases after the winemakers take their share of the harvest. The 2007 Tardy, named after winemaker Jacques Tardy, is a bold earthy Pinot that was the best of the trio. Albeit slightly milder in flavor and possessing a good balance between the fruit and minerality of the wine, the 2007 J. Christopher Pinot Noir was also very appealing. The most expensive wine of the trio, the 2007 O’Donnell Pinot Noir, was the least impressive of Bella Vida’s offerings but good nonetheless. This small vineyard creates very good wines, each with the unique touch of their respective winemaker, leading Bella Vida to consistently sell out of their limited production before Thanksgiving.

Lenne Estate
One of the best small vineyards in the Yamhill area, Lenne Estate has created some wonderful Pinot Noir wines with the winemaking assistance of Owen Roe. The 2007 LeNez Pinot Noir blends wines from a variety of barrels resulting in a light, slightly earthy wine that is well balanced. Alternatively, the 2007 Lenne Estate Pinot Noir is a bolder wine with the flavors slightly overwhelmed by its youth. An interesting selection for the Willamette Valley, the 2007 Owen Roe Rosa Mystica Cabernet Franc was well crafted and had an aromatic nose. Lenne Estate stands out as an promising small vineyard. 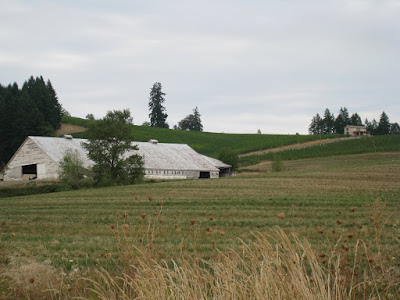 St. Innocent Winery
St. Innocent Winery, with vineyards in the Eola-Amity Hills near Salem, Oregon, was founded in 1988 by Mark Vlossak and obtains grapes from eight different growers in addition to their own vineyard. Featuring an array of Pinot Noir and the obligatory Pinot Gris and Pinot Blanc for white wine enthusiasts, St. Innocent generally offers average wines with little distinguishing characteristics. Their 2007 Winemaker’s Cuvee and Mamtazi Vineyard Pinot Noir both have a strong unappealing cocktail sauce bouquet and flavor. In contrast, the 2007 Shea Vineyard Pinot Noir was by far the standout with a pleasant nose and good mellow balance of spice and berries on the palate.

Lange Estate Winery and Vineyards
A larger winery from the Dundee Hills, Lange Estate produces 14,000 cases of Pinot Noir, Chardonnay, and Pinot Gris annually. Their 2007 Pinot Noir Reserve, a blend from multiple vineyards, was smoky and earthy with hints of fruit on the finish. Outside of their lineup of six different Pinot Noirs, the 2007 Freedom Hill Vineyard Chardonnay was sweet and not as buttery as its Californian peers. In general, Lange Winery produces decent wines but very few standouts.

Erath Winery
As one of the oldest wineries in Oregon, Erath Winery has developed a reputation for Pinot Noir, but it also produces many of the common white wine varietals such as Pinot Gris, Pinot Blanc, and Gewurztraminer. By 1987 the Dundee Hills winery had grown to 35,000 cases and national distribution before being sold to Ste. Michelle Wine Estates in 2006. A visit to the tasting room reflects its corporate culture as it is a popular stop on the tour bus circuit. The 2006 Pinot Noir from the Leland Vineyard was the best of the lot, but the general impression was that, while there was nothing ostensibly wrong with the Erath wines, there was nothing remotely exceptional about any.

WillaKenzie Estate Winery
Next on the list of popular tour bus stops would be WillaKenzie Winery, complete with a large tasting room on a 420 acre estate in Yamhill, Oregon. Despite being located very close to Lenne Estate, the wines of WillaKenzie were some of the least impressive of this small sample of Northern Willamette Valley wineries. All were average at best, with the 2006 Pinot Noir Terres Basses standing out as one of the better efforts. In contrast, the 2007 Pinot Noir Thibaud’s Cuvee was overpowered by earth and cedar with a strong biting alcohol finish that is rare among Pinots.

Maresh Red Hills Vineyard
A small and unassuming vineyard with the tasting room located in a red barn, Maresh Vineyard has a friendly atmosphere and an affordable array of good wines. Jim Maresh was one of the early pioneers of viticulture in Oregon, planting their 140 acres in 1970 with Pinot Noir, Pinot Gris, Riesling, and Sauvignon Blanc. Maresh retains experienced winemakers to produce their wines in similar strategy as their neighbor Bella Vida Vineyards, and retails their small lot wines exclusively from their tasting room.

Redhawk Vineyard and Winery
Just north of Salem, Oregon in the Eola-Amity Hills is Redhawk Winery, a smaller producer that grows primarily Pinot Noir, Pinot Gris, and Chardonnay in the surrounding vineyard. While Redhawk doesn’t have the strongest portfolio of wines, there are a few worthy of note. Famous for its value priced, and commensurate quality, “Grateful Red” Pinot Noir, the winery’s best offering was the 2006 Pinot Noir Vinter’s Reserve. White wine aficionados will appreciate the 2008 Riesling, which prominently featured citrus flavors with the perfect balance of residual sugar. 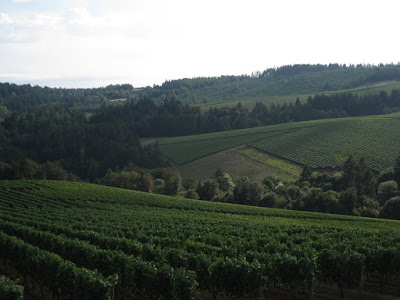 Vineyards Cover the Hillside Separated by Forests of Pine

The preceding reviews represent the collective evaluation of the taste, color, flavor, and bouquet of the various wines by two experienced, yet non-professional, oenophiles. The plethora of gold medals that adorn relatively common wines demonstrates that wine appreciation is subjective and largely determined by individual preferences and ability to discern the subtleties of each wine. Both the quality and value of each vineyard were considered in order to guide perspective visitors and customers on their own exploration of the wines of the Willamette Valley in Oregon.
Email ThisBlogThis!Share to TwitterShare to FacebookShare to Pinterest
Newer Post Older Post Home