Rows of neatly manicured vineyards adorn the hillsides of Oregon’s winemaking regions. Lane County, extending from the Oregon coast to the Cascade mountain range in Central Oregon, includes the southern portion of the Willamette Valley, Oregon’s most notable viticultural region. Located southwest of Eugene, the naturally irrigated hills are intermittently populated by relatively young vineyards scattered among forests of pine trees and grass covered lowlands. Pinot Noir, identifiable by the tight pinecone shaped clusters of small dark purple berries, is the dominant red wine varietal of the region. The Willamette Valley is ideally suited for the varietal as it shares a similar climate and longitude with the Burgundy region of France, which pioneered Pinot Noir cultivation and has established the benchmark for quality worldwide. 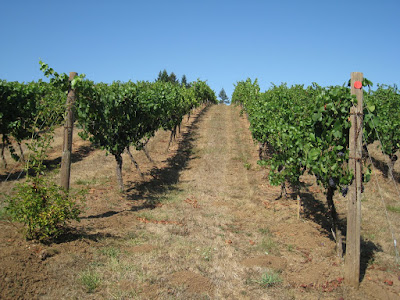 Rows of Pinot Noir in the Southern Willamette Valley
The Southern Willamette Valley is sparsely populated with relatively young vineyards, but the region generally lacks the quality or experience of its northern competition. The largest vineyard in the area is King Estate with 465 acres of organic vineyards and a monstrous mountain top estate with banquet rooms, a restaurant, and winery facilities. King Estate is sure to be a regular stop on wine tasting tours, but it features relatively common wines across a confusing array of brands in a failed attempt to distinguish relative quality. The 2006 Craftsman Gewurztraminer had a nice floral bouquet and relatively high residual sugar, but the red wines were unanimously mediocre.

A few miles to the south in Lorane, Oregon is a small rustic vineyard, Chateau Lorane. Featuring a relatively unusual portfolio of varietals for the Willamette Valley, Chateau Lorane fails to impress in its production of Tempranillo and Merlot but had a slightly more interesting hybrid varietal, Leon Millot. A very sparsely grown French-American hybrid, Leon Millot is considered to have Burgundian characteristics, if not heritage, and was a unique alternative to the abundant array of Pinot Noir.

Closer to Eugene, Oregon is Sweet Cheeks Winery, a small vineyard with a tasting room that is dwarfed by its spacious patio and picnic facilities that feature panoramic views of the Briggs Hill Valley. Their affordably priced wines would likely appeal to the neophyte looking for a pleasant (and free) tasting experience, but generally were of average quality. The 2007 Dry Riesling was extremely dry and had a metallic residual, a stark contrast to the 2008 Semi-Sweet Riesling which was very sweet and had vibrant peach flavors. Perhaps the most appealing wine was the 2008 Pinot Fusion, a blend of Pinot Noir and Cabernet Franc aged briefly in old American and French oak. While not imbued with intense flavors, the wine was well balanced and a marked improvement on a relatively disastrous 2007 Pinot Noir. 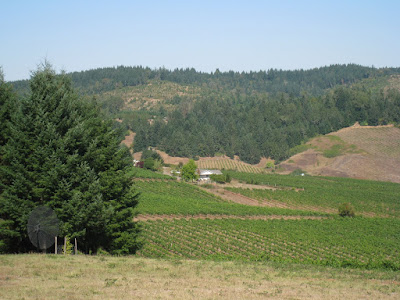 Silvan Ridge Winery, located directly across the road from Sweet Cheeks Winery, features a better array of red wines. The 2007 Silvan Ridge Pinot Noir had earthy aromas with a flavorful berry finish. In contrast, the 2006 Silvan Ridge Merlot and 2007 Syrah lacked any distinctive characteristics and were relatively disappointing. The 2006 Pinot Noir Reserve had a more muted nose and less berry flavors on the palate rendering it lacking compared to its peer. Finally, Silvan Ridge featured a few wines from Southern Oregon’s Rogue Valley including the 2006 Cabernet Sauvignon and the 2005 Elizabeth’s Reserve, a blend of Bordeaux varietals and some Syrah. The Cabernet had good flavor and was much lighter on the oak compared to its Californian counterparts, but the Elizabeth’s Reserve was unfocused and inferior to most Bordeaux style blends.

The generally small vineyards of Southern Willamette Valley are welcoming and offer a more rustic experience compared to the large commercial ventures of Napa or Sonoma, California. Many have been founded only recently and seem to lack the experienced staff of a larger operation, but a handful of notable wines can be found among the array of enological creations. The region, as a whole, seems to be in its infancy compared to the relatively more organized Northern Willamette Valley, but it will likely develop into a formidable competitor in the coming decades.
Email ThisBlogThis!Share to TwitterShare to FacebookShare to Pinterest
Newer Post Older Post Home