The warm summer months of California’s most famous viticultural region have given way to cool autumnal temperatures and a culmination of the growing season. A blanket of morning fog rolls down the mountains that separate Sonoma from Napa Valley, enveloping vines that have long since shed their fruit and adopted shades of yellow and red in celebration of their bounty. In the warmer Napa Valley, vineyards rush to collect the remaining clusters of berries before the cooling weather and impending rains jeopardize the quality of their grapes. The 2009 harvest has indeed been plentiful, but the abundance of fruit from a growing number of producers and weaker demand for wine has resulted in drastically lower prices for grapes. 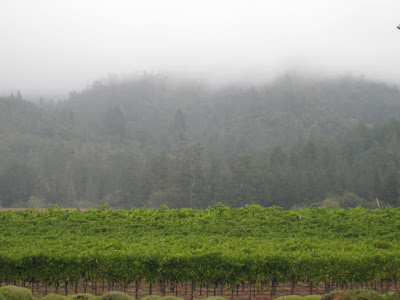 Fog Descends on the Vineyards of Sonoma County
Widespread reports of consumer retrenchment were called into question by the large Columbus Day weekend crowds that invaded the region to sample some of California’s most refined wines and dine at world class restaurants. The throngs of people that invaded both Napa Valley and Sonoma County, however, may have masked an evolution of the psyche of consumers in the United States. A slowly emerging economic recovery leaves Americans increasingly cognizant of their own fragile fiscal position, resulting in a more discerning consumer that shuns the ambitious prices that wineries have come to enjoy. Much like any artist, winemakers often have inflated opinions of the value of their wine and have utilized creative marketing techniques to create an air of exclusivity to justify these prices. With consumers increasingly reluctant to pay hundreds of dollars for a Napa Valley Cabernet Sauvignon or Bordeaux style blend, winemakers may resort to blending some of their best wine to improve the quality of their overall production while reducing the cost to the consumer.

St. Francis Winery & Vineyards
A leading producer of Zinfandel and other big reds in Sonoma County, St. Francis has produced great wines at reasonable prices for over thirty years. Exclusive production agreements with various vineyards around Sonoma County enable St. Francis to create distinct single vineyard wines that exhibit the specific character of the grapes, in addition to those grown in their own vineyards. St. Francis’ 2005 Pagani Zinfandel, derived from the gnarled 130 year old vines from a property just south of the winery, is heavy on the spice but exhibits the bold distinctive nature of the varietal. Another source of quality old vine Zinfandel is the Bacchi Vineyard located south-east of Healdsburg. The 2006 St. Francis Bacchi Zinfandel is jammy and lighter on the spice compared to the Pagani, but is equal in intensity of the flavor. A Grenache based Rhone style blend, the St. Francis Cote du Sonoma, was one of the surprising treats of the recent releases. A visit to St. Francis Winery is not complete without a food and wine pairing that is well worth the $30 fee.

Simi Winery
Located in Healdsburg, CA approximately 11 miles north of Santa Rosa off US 101, Simi Winery features the typical array of wines for the region – Sauvignon Blanc and Chardonnay for white wines and Cabernet Sauvignon and Zinfandel as the predominant reds. Simi’s 2007 Dry Creek Valley Zinfandel was full of cedar, smoke, and jammy berries on the nose, but had a slightly biting alcohol finish that left it lacking when compared to St. Francis. Similarly, the 2006 Landslide Vineyard Cabernet Sauvignon had enticing flavors of oak, plum, smoke, and cocoa on the nose but the flavor was decidedly a let down in comparison. Their best wine, the 2005 Alexander Valley Reserve Cabernet Sauvignon had a much smoother finish and a nose of oak, cherry, and plum. While it is a good wine, it is a bit aggressively priced at $65.

Robert Mondavi Winery
One of the oldest and most famous wineries in the Napa Valley, Robert Mondavi is located in the Oakville district a short distance north of the city of Napa on Highway 29. A pioneer in aging Sauvignon Blanc in oak and marketing it as Fume Blanc, Robert Mondavi wines are often heavy on the oak, sometimes to their detriment. The 2005 Stags Leap Cabernet Sauvignon, however, is a beautifully balanced wine with a rich nose and just the right amount of oak. The new 2006 Reserve Cabernet Sauvignon is a little bolder on the oak, but still a quite impressive wine that could be enjoyed now or could be laid down. At $85 and $135 respectively, the wines certainly are not cheap but are among the few that justify their lofty price. 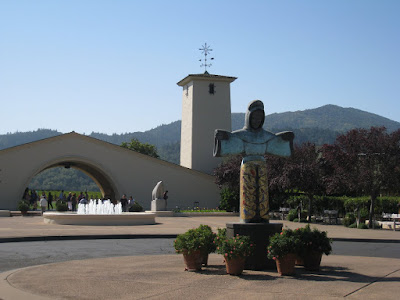 Robert Mondavi Winery in Oakville, CA
Joseph Phelps Vineyards
Known for their Bordeaux style blend Insignia, Joseph Phelps is located in Spring Valley near St. Helena. The winery is filled more with a haughty air of arrogance rather than the pleasing aromas of wine. Their 2006 Joseph Phelps Insignia has the nose of an average Meritage with slight hints of strawberry and clove and in no way merits its $200 price. After refusing to pour their 2005 Backus Vineyard Cabernet, they offered up a decidedly average 2006 Napa Valley Cabernet Sauvignon that had a mild uninspiring nose, but a smooth finish. Joseph Phelps exemplifies the disconnect between price and quality, with only their 2006 Merlot possessing some degree of character and value.

Robert Sinskey Vineyards
A biodynamic and organic producer of wines, Robert Sinskey Vineyards sources much of their grapes from the Los Carneros and Stags Leap regions of Napa Valley. Their 2005 Los Carneros Marcien, a Bordeaux style blend, is a great wine full of cherry and plum aromas. At a full retail price of $65, it is a far superior value to the Joseph Phelps Insignia. The 2005 Vandal Vineyard Cabernet Sauvignon is a good wine with notes of jam and vanilla. In general, Robert Sinskey produces good wines of reasonable value, but one should expect little flexibility on discounts and expensive tasting fees (partly refundable) designed to induce sales.

Kuleto Estate
A newer winery on the Eastern edge of the Napa Valley near Lake Hennessey, Kuleto Estate graces an expansive hilltop ranch with approximately 100 acres of planted vineyards across the mountainous range. Despite being founded in 1992, the winery produces surprisingly good wines. Their 2007 Chardonnay is slightly buttery with crisp notes of apple and pear while the 2006 Zinfandel has a nose of peppery spice, plum, and currants. The 2004 Cabernet Sauvignon had notes of coffee, toasty oak, and jam and was quite good. Tastings paired with cheese are by appointment only, and they are expensive at $35 each but include a tour of the property and its spectacular views. The seemingly frequent incidence of corked bottles, however, is of possible concern, with no less than three discarded during the tasting and reportedly others the day before. 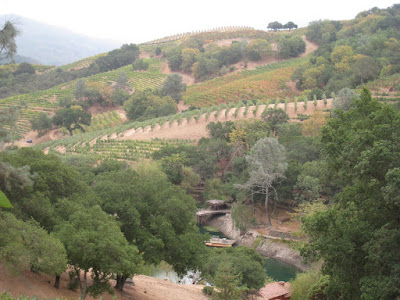 Kuleto Estate Vineyards Adorn the St. Helena Hills
Frank Family Vineyards
North of the hustle and bustle of the Central Napa Valley wine growing region in Calistoga, adventurous travelers will find Frank Family Vineyards, producers of both sparkling and still wines. All of their sparkling wines are incredibly dry, with the flagship 1997 Signature Brut consisting of fruit from the Carneros region that has spent more than three years on the yeast and eight years in its second fermentation using the traditional French Methode Champenoise. The 2006 Napa Valley Zinfandel and Cabernet Sauvignon were both decent wines, but the best was the 2006 Reserve Cabernet Sauvignon from the Rutherford region. Comprised of 85% Cabernet Sauvignon, 5% Cabernet Franc, 5% Merlot, and 5% Petite Verdot, the 2006 Reserve was well balanced with a velvety smooth mouth feel. 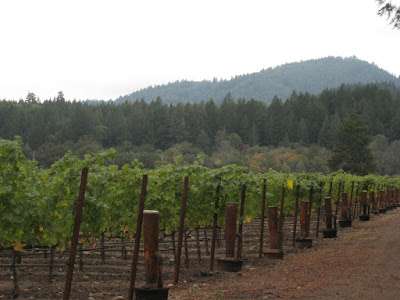 Rows of Vines at the Frank Family Vineyards in Napa Valley
Cuvaison Estate Wines
Calistoga based Cuvaison features an array of quality wines from the Mount Veeder and Los Carneros regions. The 2006 Bald Mountain Zinfandel offered a nose of plum and blackberry jam. Better yet was the 2007 Diablo Syrah with slight hints of earth and lots of berry. Equally impressive was the Brandlin Cabernet Sauvignon, a smooth wine with notes of cedar and vanilla that was the lone outlier at a price of $85. The majority of Cuvaison wines are offered at $30-45 and represent a good value for the quality.

Groth Vineyards & Winery
A large producer in Oakville, Groth keeps it simple with the Napa Valley staples of Sauvignon Blanc, Chardonnay, and Cabernet Sauvignon. The 2006 Cabernet Sauvignon, blended with 21% Merlot, features a nose of plum, vanilla, and cherry but has a slight bite on the palate. In contrast, the 2006 Cabernet Sauvignon Reserve, a limited release of 1200 cases, has a smooth finish with hints of French oak and a nose of oak, plum and jam. The price, however, is quite aggressive at approximately $120 per bottle.

Peju Province Winery
Located on Highway 29 just north of Oakville, the Peju Winery obviously benefits from its location in a highly trafficked area abundant with curious tourists. The mediocre wines of Peju are aggressively priced and inspired many visitors to pour out more than they drank. The 2008 Estate Chardonnay, with a nose of toasty oak and apple, was acceptable, but the 2008 Sauvignon Blanc was metallic and had notes of an ash tray on the palate. The 2005 Cabernet Sauvignon had a mild nose dominated by oak and a strong unrefined palate. Better options exist elsewhere. 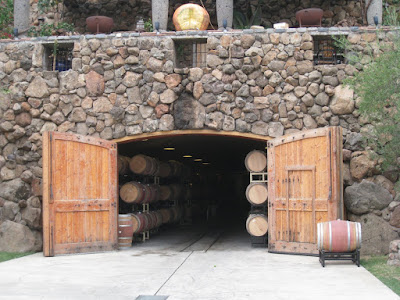 The preceding reviews represent the collective evaluation of the taste, color, flavor, and bouquet of the various wines by two experienced, yet non-professional, oenophiles. The plethora of gold medals that adorn relatively common wines demonstrates that wine appreciation is subjective and largely determined by individual preferences and ability to discern the subtleties of each wine. Both the quality and value of each vineyard were considered in order to guide perspective visitors and customers on their own exploration of the wines of Napa Valley and Sonoma County.
Email ThisBlogThis!Share to TwitterShare to FacebookShare to Pinterest
Newer Post Older Post Home