and is most well known for Pinot Noir. I am neither a Sideways

fanatic nor overly enamored with most Pinot, many of which I find bland and lifeless, but nonetheless I have been to this Central California wine region three times in the past nine months. Unlike the densely populated Sonoma or Napa Valleys, the Santa Barbara wine region is peppered with wineries concentrated around Solvang and Los Olivos as well as some along Foxen Canyon Road. 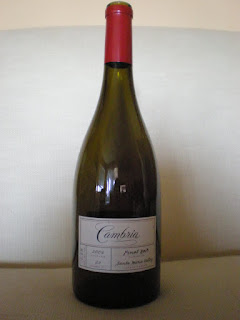 On a trip to the region last fall, we ventured to the outer limits of the region and found Cambria Winery. We were turned away despite arriving 15 minutes before they closed at 5 p.m. The manager offered a complementary tasting for our next visit, but I was quite put-off by the experience and never expected to use it. Surprisingly, I held on to that card and on my next visit that served as an impetus to give Cambria another try. I was glad I did.

Cambria, of the Santa Maria Valley, features a nice mix of Pinot Noir made from various clones sourced from the Burgundy region in France. While most possessed the nuanced flavors and subtleties of a good Pinot, the Cambria 2006 Clone 23 was the particular standout. Notes of vanilla, cinnamon, strawberry run wild on your palate in addition to spice on the nose characteristic of most Pinots. Clone 23 has an unusually high alcohol level for a Pinot Noir of 15.6%, but it isn’t overpowering as it might be in other wines. Overall, the Cambria 2006 Clone 23 is a fine wine and one of the better Pinots of the region.

Full Disclosure: I received one free tasting, but have since paid for others. I paid current retail price for all of the bottles of wine that I obtained at Cambria. On my last visit, I was sold the final bottle of the 2006 Clone 23, but the 2007 is another good wine.
Email ThisBlogThis!Share to TwitterShare to FacebookShare to Pinterest
Newer Post Older Post Home