German Riesling and the Wines of the Mosel

With over 1300 breweries, Germany is a country that cherishes its beer. Only the Czechs and the Irish consume more beer per capita. In contrast, the German wine industry has experienced mixed success over the years as consumer preferences change and evolve. While German Rieslings are some of the most celebrated white wines, characterized by fragrant aromas and an elegant fruity palate, the reputation of German wine is threatened by confusing labeling and the prevalence of mass market Liebfraumilch, a cheap semi-sweet wine made of lesser quality varietals. 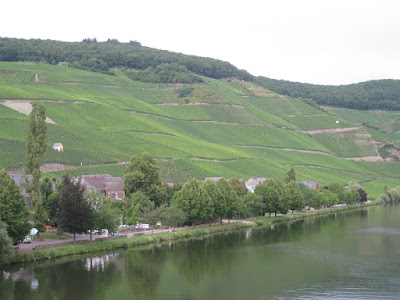 Wine has been made in Germany since the Roman Empire, with the most reputable located along the fertile hills of the Rhine River and its tributaries. These wineries are located in one of the most northern wine growing regions of the world, but have a unique terroir that is well suited for Riesling grapes. The Rhine’s tributaries such as the Mosel, the Nehe, and the Ahr all have unique characteristics that provide various advantages in viticulture and wine production. The winding Mosel River has varying microclimates created by the bends in the river, the steep southerly exposed slate hillsides, and a multitude of valleys and ridges that control air flow. While the slate hillsides moderate the temperature swings and warm the vines in the evening, the rocky soil also causes the vines to struggle for resources, producing concentrated high quality wines. It is here along the steep slopes of the Mosel that some of the best German Riesling is produced.

Part of the confusion among those less familiar with German wine is the classifications of the Prädikat. Most exported wines are of Qualitätswein mit Prädikat (QmP) quality, which certifies the characteristics of the grape must used to produce the wine. This form of classification does not specify the characteristics of the final wine, but simply controls for the concentration of sugars in the must (must weight). Therefore, there can be variation in sweetness and alcohol levels due to how completely the must is fermented and other preferences of the winemaker. While the six classifications provide a good indication of the degree of residual sugars and the quality of the grapes with which the wine was produced, the classification system permits significant variation in winemaking style and often blurs the lines that separate the various categories.


In addition to the classification system, confusion emerges from the German labeling rules which allow producers to mislead potential customers with designations that suggest theirs is a single vineyard wine from a highly desirable location when instead it is a lower quality regional wine with grapes drawn from potentially a number of inferior vineyards in the area. While the price will likely give away the quality, the only recourse consumers have is to familiarize themselves with the leading producers and vineyards of the region.

In my upcoming trip to the Mosel River Valley, I will be traveling to three of the top wineries to sample their wines and reflect upon the intricacies of exquisite German Riesling. Reviews of their offerings can be found by following the links below.