Reinhold Haart is a smaller producer (~50,000 bottles per year) located in the highly regarded Piesport region of the Mosel.  Johannes Haart, the young winemaker that spearheads efforts and Reinhold Haart, has focused production primarily on Kabinett and Spätlese, forgoing the late harvest wines that are subject to the uncertainty of the late fall and early winter weather.  An inopportune rain could easily wipe out the harvest of grapes that were left on the vine into late November and December and are left impaired by botrytis. 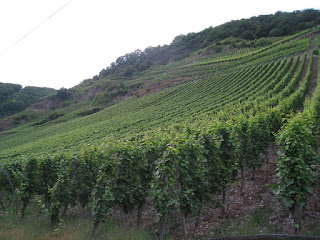 Like other German wineries, Reinhold Haart has accommodated the dry and half dry demands of the market by producing relatively affordable array of blend and single vineyard wines.  Consistent with my personal preferences, however, I found most of trocken and feinherb wines to be average, but my companions found a few to be quite enjoyable including the very affordable 2009 Haart to Heart Riesling feinherb (€ 7.50 at the estate – approximately 5+ / 10) and the single vineyard Ohligsberger Riesling trocken (€ 18.00 at the estate – approximately 5+ / 10).