The two giants in wine production, Italy and France, are the top two global producers and feature some of the most heralded and expensive wines of the world. Speculation and excessive exuberance often inflate the values of the best vintages in Bordeaux due to the unique sales system involving “futures” sales of wines that have yet to be released, but the finest Italian wines are also highly coveted and command high prices. With investors driving prices of Bordeaux higher with each successive “vintage of the century”, one is left to question if the prices of the wines are reflective of their value to the ultimate consumer or instead the inflated expectations of speculators with no interest in ever enjoying the incredible wines. The 2009 vintage just may mark the pinnacle of decades of speculation that is perhaps a modern example of the Dutch Tulip Mania of the 1600s.

As the prices of Bordeaux’s top wines exceed the budget of most rational consumers, one ponders if other fine wines can compete in a head to head match-up. To put this to the test, a panel of experienced wine specialists convened at the Grand Californian Hotel’s Napa Rose Restaurant in Anaheim, CA to pit one of Pauillac’s finest producers against a Barolo from the Piedmont region of Italy. 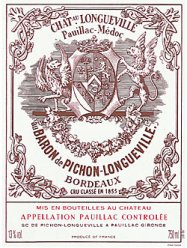 2005 Château Pichon-Longueville Baron (Pauillac) - $129.99 retail
A characteristic Pauillac nose of pencil shavings or graphite was present with a veil of oak and hints of silky smooth vanilla in this beautifully balanced Pichon-Baron from one of the top vintages of the past decade. As the wine evolved in the glass and decanter, notes of mild cocoa or coffee began to emerge, but this young wine had a relatively tight grip on its fruit which was generally hidden. The palate revealed well balanced tannins that would provide requisite structure for further aging. A smooth and lingering finish rounded out this fine wine that is everything you would expect from a top Bordeaux chateau. The 2005 Château Pichon-Longueville Baron fine wine that likely has its best days in front of it. 8+ or 9 / 10 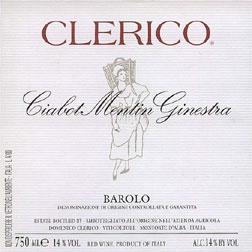 2000 Clerico Ciabot Mentin Ginestra Barolo (Langhe, Piedmont) - $99.99 retail
The nose was dominated by dusty aromas of earth and a mild smokiness with evolving scents of dark purple fruits. A pronounced spiciness prevailed, perhaps reminiscent of cardamom or all-spice. The Clerico Barolo was much thicker on the palate with predominant tannins that lingered well beyond the lengthy finish. Perhaps these tannins will integrate further with extended aging, but they were in no way astringent or unpleasant. The 2000 Clerico Ciabot Mentin Ginestra Barolo is a very fine example of an Italian Barolo that has aged with grace. 9 / 10

Ultimately, the Pichon-Baron of Bordeaux was slightly more refined with perfect balance, but it was less complex than the Clerico Barolo. The 2000 Clerico Ciabot Mentin Ginestra Barolo was less balanced with pronounced alcohol (14.5%) and tannins, but it had exquisite depth to the nose and an extended finish. All things considered, the majority of our panel favored the Barolo, but thoroughly enjoyed both wines. Despite my predisposition towards Bordeaux, I thoroughly enjoyed the Clerico Barolo and found it to be the better value. 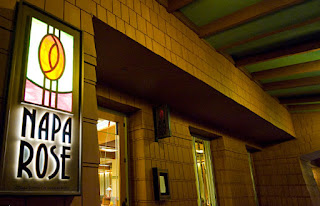 The Napa Rose Restaurant is widely renowned as one of the best restaurants in Orange County, California. The food was quite good, as was the service, but neither seemed representative of a truly high end restaurant. Our server graciously waived the corkage fee and offered us complimentary Veuve Clicquot Ponsardin champagne to begin the evening. I ordered the “Vintner’s Table” prix fixe menu, but they forgot to bring the desert and failed to offer us additional bread with our multiple courses. The wine list and the menu are not posted online so you are flying blind unless you are staying at the hotel. Their wine list is not very deep and is dominated by very expensive wines from Napa and other regions at one extreme and lower end wines at the other, without more affordable alternatives in the middle. Most of their Bordeaux wines were 1982 or older – prestige or statement wines that aren’t accessible to almost anyone – and many are large format bottles which would not be appropriate for the parties of 2 – 4 people that populated the majority of the tables. Overall, it was a nice dinner, but perhaps lacked the innovativeness and exceptional level of service that you would expect for $100+ per person.
Email ThisBlogThis!Share to TwitterShare to FacebookShare to Pinterest
Newer Post Older Post Home