Global Standards of Excellence in Wine: Bordeaux and Barolo

The incredible showing of the 2005 Pichon-Baron and 2000 Clerico Ciabot Mentin Ginestra Barolo at the Napa Rose Restaurant necessitated a more in depth blind tasting of the premier wines of the Bordeaux region France and the Piedmont region of Italy. After extensive planning and preparation, six exquisite bottles were selected to be blind tasted by a select panel of experienced connoisseurs. The general conclusion was that the wines expressed great typicité and sophistication. Detailed tasting notes follow. 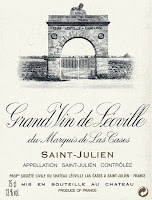 
The 1988 vintage in Bordeaux was very good, even if it wasn’t fully appreciated at the time.  While the 1988 vintage favored the right bank and Sauternes / Barsac white wines, there were numerous successes among the left bank producers.
Well known as one of the “super seconds”, Chateau Léoville-Las-Cases managed the 1988 vintage well and certainly lived up to its reputation.  Rated as the favorite in the group, the Las Cases displayed dark fruits, smoke, and oak on the nose which gave way to a palate with a slight tinge of acidity and well integrated tannins.  The wine is drinking very well, but the fruit has begun to give way suggesting that it has peaked.  Moderate finish, but a great overall wine.  8+/10
1989 Château Pichon-Longueville Baron (Pauillac - Deuxièmes Crus) 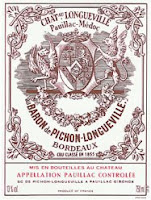 The 1989 vintage was excellent and was possibly exceeded only by the legendary 1982 vintage for the entire decade.  A dry warm summer favored the left bank, particularly St. Julien and Pauillac, but Sauternes benefited from October rains that prompted the botrytis to sweep through the vineyards.
Château Pichon-Longueville Baron had a reputation in the 1970s and early 1980s for poor quality control and excessive macerations, but in 1987 it was acquired by AXA Millésimes and quickly the entire chai was rebuilt with a focus on restoring the estate to the pedigree of a Pauillac second growth.  This wine exemplified the pedigree of Pichon-Longueville Baron but was slightly more concentrated and new world in style that a traditional Pauillac wine.  Quite nice deep purple fruit, sweet tobacco leaf, and smoke on the nose.  A bold, thicker, creamy palate suggests a much younger wine (as did the color), and many in the group thought that there was a merlot characteristic to the wine.  Quite nice, and a favorite among some.  8/10
1995 Chateau Cos d'Estournel (Saint Estèphe - Deuxièmes Crus) 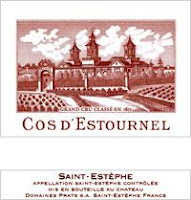 After opening the decade with the highly successful 1990 vintage, Bordeaux went through a challenging period that gave way to a very good 1995 vintage and perhaps an even better 1996 vintage.  The true test of the vintners’ accomplishment in 1995 was if they were patient in the face of the potential for September rains and allowed their crop to achieve phenolic and technical ripeness.
As perhaps the top estate in Saint Estèphe, Chateau Cos d'Estournel certainly delivers the goods with a wine that was extremely well regarded by the group.  A slight funk to the nose the dominated initially quickly blew off to reveal coffee, some graphite, and hints of vegetal aromas.  The graphite becomes more prevalent with time as the coffee and funk give way.  Smooth on the palate, but perhaps not as deep or complex as the other Bordeaux wines tasted.   The tannins were well integrated, as they were with all the Bordeaux wines.  Ultimately, this wine was drinking well, but the general consensus was that it could use a few more years to reach its peak potential.  8/10
Piedmont


1996 Parusso Bussia Vigna Rocche Barolo
Noticeable bricking on the rim is indicative of this Barolo’s age.  Tar, black licorice, and alcohol fumes dominated the nose initially with hints of cherry and cranberry emerging with time.  Acid, sour cherry, and oak are noticeable on the palate.  Medium plus to extended finish rounds out this traditional style Barolo.  Quite noticeable alcohol, despite an indication of 14% by volume, throughout is somewhat of a flaw.  7/10
2000 Massolino Vigna Rionda Barolo Riserva
The Massolino is a slightly darker wine, but still has modest bricking on the edge.  Once again, the traditional notes of tar and cherry with hints of rose dominate the nose.  Strong alcohol on the note and very stringent acid on the palate result in this wine being somewhat of a disappointment.  A short and unmemorable finish leaves this wine as the lowest rated of the group.  5/10
1999 Cavallotto Bricco Boschis Barolo Riserva 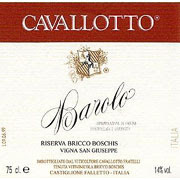 Despite an initial funk that dissipates, the nose displays the characteristic tar, cherry, and licorice notes without any astringent alcohol pungency.  The palate was more complex than the other Barolos, but perhaps a bit confused or contradictory.  Vegetal notes, earthiness, and sweet oak were predominant on the palate.  Made in the traditional style of Barolo and possessing the most alcohol of the three (14.5%), this wine was the most integrated and balanced of the three Barolos.  7+/10
Email ThisBlogThis!Share to TwitterShare to FacebookShare to Pinterest
Newer Post Older Post Home